(The following project was created for personal development only) 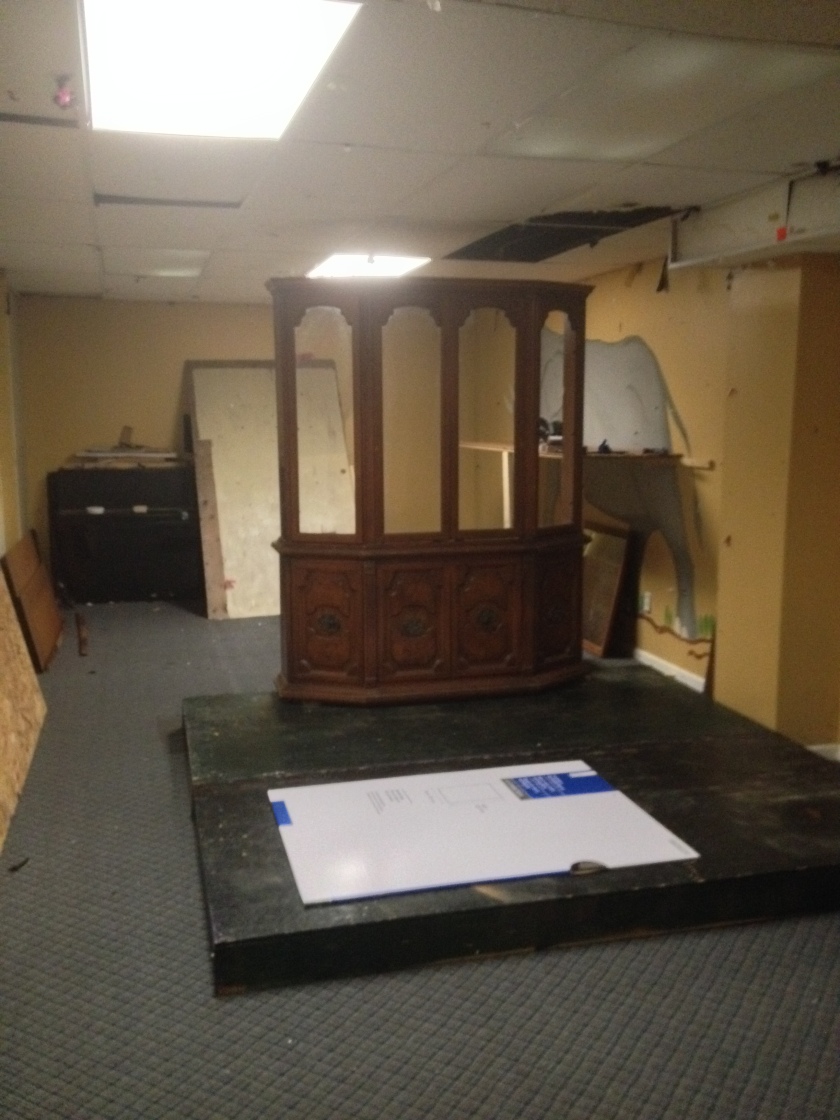 The room begins to take shape. 4/25/15 :The walls were all framed out and are starting to come up. Walls will be on the left and right side, and front of room. The back will be left open to operate the flying seats and effects. 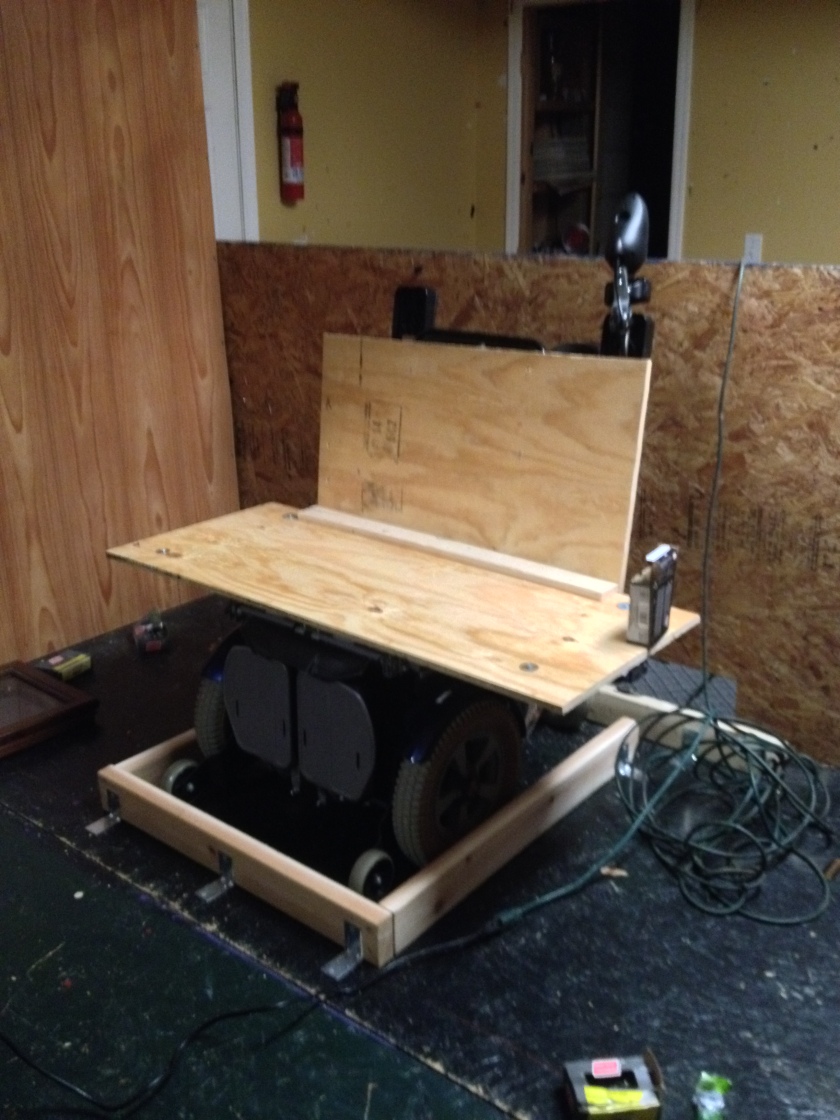 The ride car that will “fly” guests to Neverland 5/2/15:  I used a donated electrical powered wheel chair for the base. I built the frame of the bench and attached it to the base. Using the functions of the chair, I will be able to move riders up and down.

The room set being painted. 5/8/15: The room is framed out complete with a roof. The walls of the Nursery set will match the wallpaper found in the animated Walt Disney film Peter Pan. 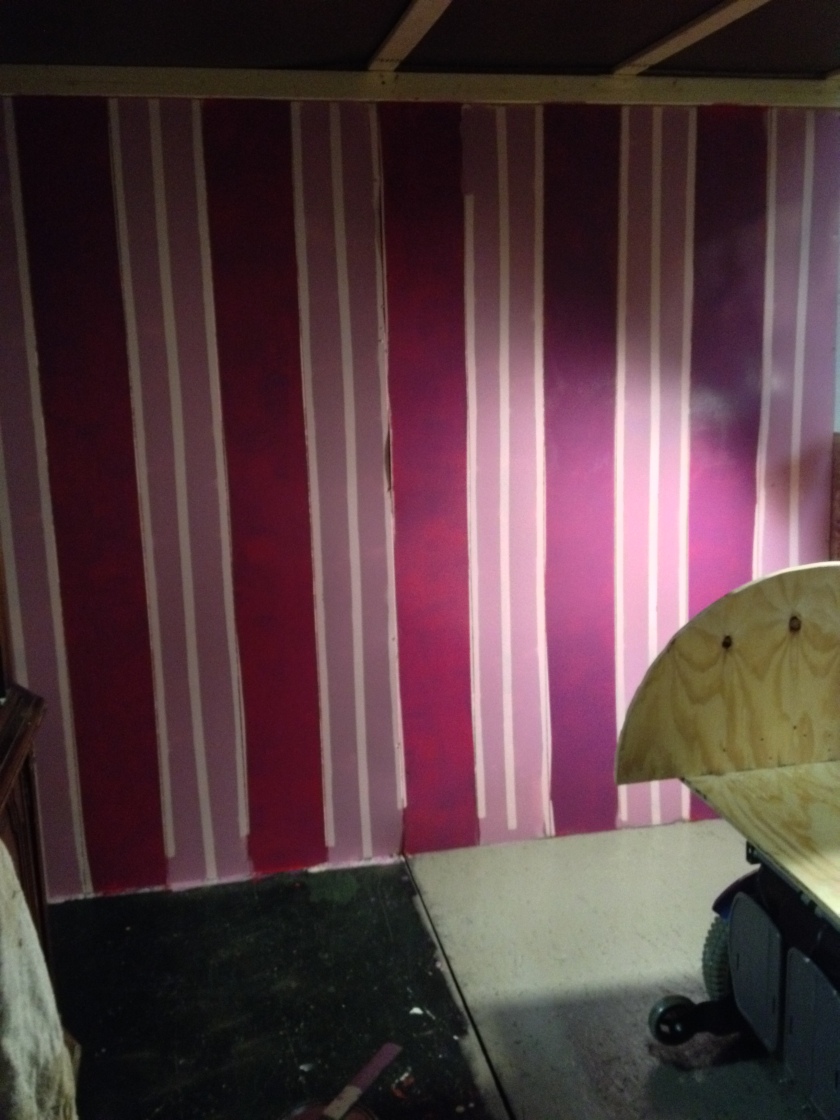 The hand painted wallpaper. 5/10/15: To get the room to look like it does in the animated film required me to hand paint the wallpaper design. I did this by mapping the design with painters tape then selecting the colors that matched the ones used in the film. 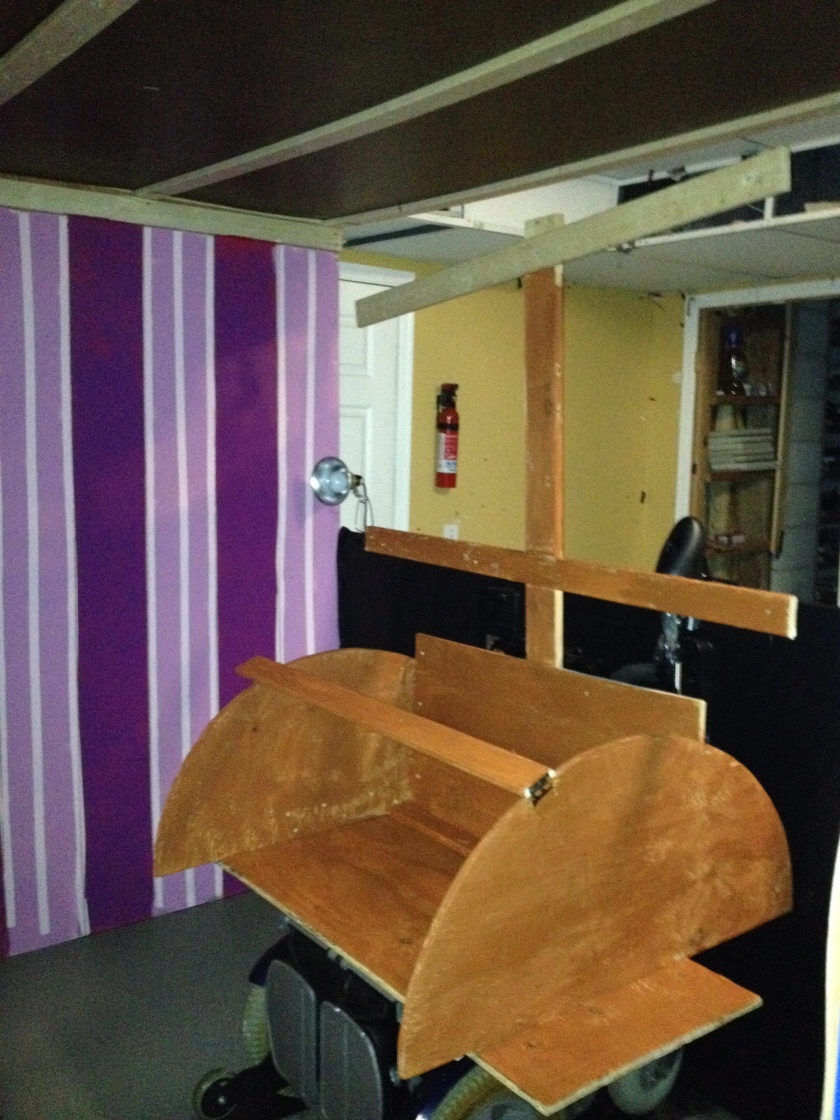 Frame work on wheelchair “Ride car” 5/15/15: The ride car design took inspiration from the opening scene of the film. John and Michael build a ship out of their bed posts and sheets, to play make believe. I thought this was the perfect design to fly my guests to Neverland.

Finished Ride car. 5/19/15: The sail frame is complete, and ready to begin testing. A skirt was added to fully hide the mechanics of the wheelchair. From behind the chair I could operate its up and down movements.

Early testing of the effects. 5/26/15: A projection of Peter Pan’s shadow would come across the wall just before the ride car takes flight. This is an early test of that effect.

This was an early test for a Tinker Bell effect. Using a scrim material I projected Tinker Bell flying back and forth spilling Pixie dust. The dim lit room and the scrim created the illusion that Tinker Bell was really floating in the room.

A cutout of Big Ben, painted with UV Paint. 6/5/15: The view outside of the nursery window will recreate the London skyline. Big Ben is printed on a foam board and cut out. Then painted over with UV lighting. 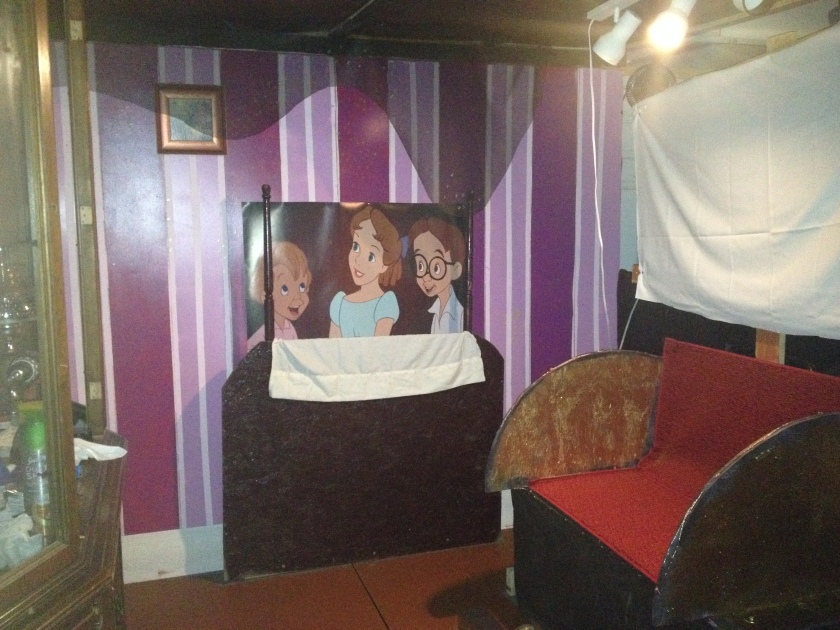 The finished nursery set. 6/21/15: The room is complete. The kids have been added into their bed. The thin black scrim above the kids will have Tinker Bell projected onto it. The focus is now on testing and animation before friends and family can ride. 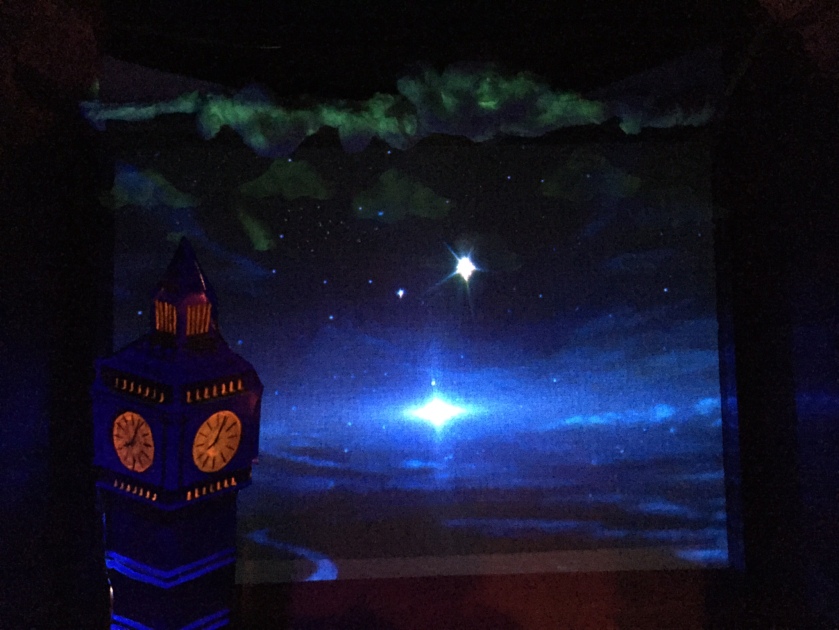 View Outside the window. 7/2/15: The London skyline was rear projected behind the cutout of Big Ben. The clouds are cotton that I sprayed with glow paint. A scrim hangs in-front of the screen, with glow painted clouds on the scrim. This created a layered effect. Big Ben was in the foreground, clouds were in mid-ground and projection was in background. The finished result gave a 3D effect with no glasses. When the riders take flight, they will see Wendy, John and Michael flying outside the window.

The little details. 7/10/15: In the film John and Michael draw a pirate map on their fathers shirt. This is a replica of that map, along with the thimble that Wendy gives to Peter Pan as a “kiss”. 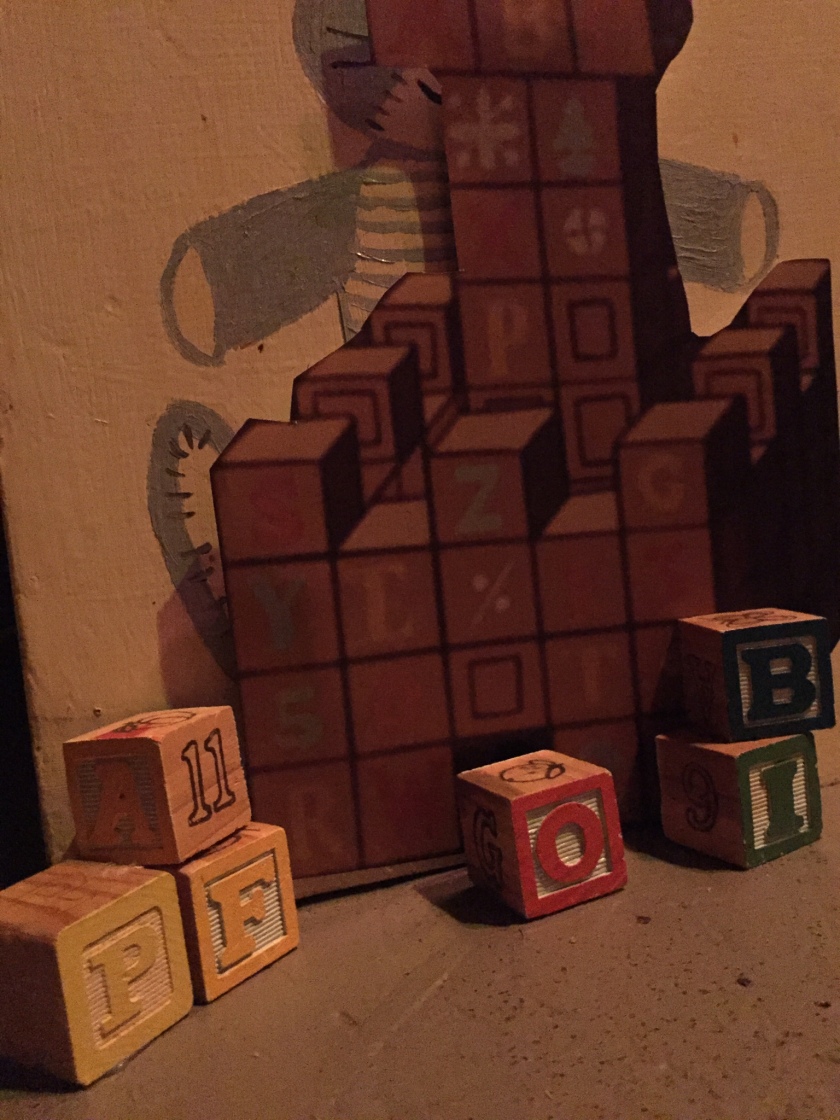 The details tell a story. 7/10/15:  I went to multiple antique stores searching for toys from the era of Peter Pan. These blocks matched the ones found in the film! In the film the kids father trips on these blocks after the “nanny” dog Nana just stacked them. Also I hid a PF on the left side for my name.

The pixie dust effect. 7/13/15: The pixie dust was a simple effect that was very convincing. Tiny pin holes were drilled into the wall. Amber colored lights behind the wall peeked through the pin holes, creating the effect of Pixie Dust!

Pixie dust effect (in show). 7/17/15: This is how the effect looked while on the ride. As the pixie dust began to shine the lights in the room dimmed. In this darkness the chair began to lift off the ground simulating the riders taking flight.

Star effects for Never Neverland. 7/23/15: After the chair lifted off the ground the screen changed to show Neverland. Tiny lasers created the starry dream world of Never-Land. At this point riders were off the ground and floating in a sea of stars.

Before people took flight on the attraction, a short Pre-show movie played. Disney fans will notice how this short film was inspired by the classic Walt Disney and Tinker Bell segment from the Disneyland Tv show. Film/Edit credit: Cody Reanu.

(Disney owns all characters. This project was for creative purpose only) 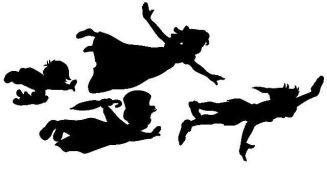